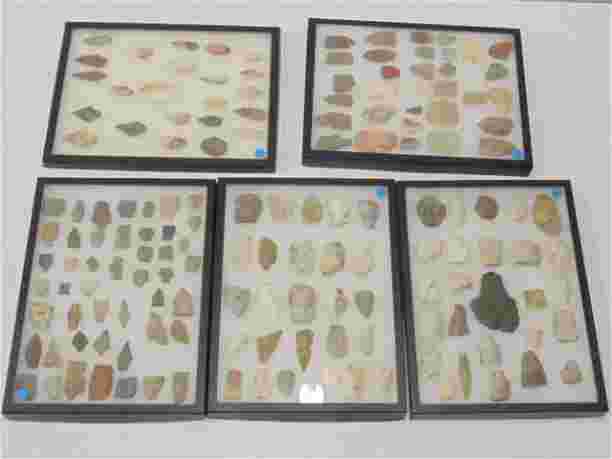 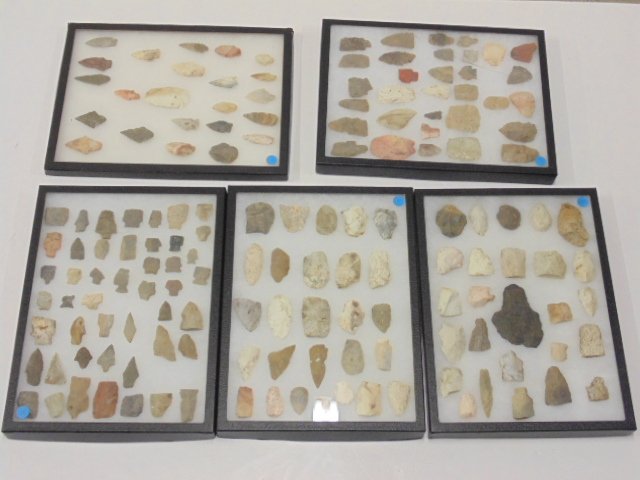 Collection of native indian arrow heads, from private collector, authority on the subject, this lot includes cases, riker mount 16 thru 20, case description:
16.Riker Mount, Artifacts: The assemblage originates in the American Bottom where Indian, Illinois, and Kentucky converge. The specimens are predominantly Late Archaic to Early Woodland in age. The chert types include Burlington Chert, Ft. Payne, and heat treated Boone Fm. chert from southern Missouri. The center of the mount is occupied by a splendid example of an Early Archaic Dalton Adze, which is fashioned from heat treated Burlington Chert.
17.Riker Mount, Artifacts: The upper row includes large bifaces of Archaic Age, all found along the Cumberland River in Western Tennessee. The notched, stemmed and tapered objects are all fashioned from the Dover Chert. Bifaces fashioned from Dover Chert are visible elsewhere in the frame, the oval pieces may be cache blades. The second row presents large ovate bifaces fashioned from heat treated Burlington Chert, along with Crescent Chert. The vivid red biface is fashioned from Buffalo River Chert, originating in southern Tennessee. The third, fourth, and fifth rows witnesses a return to the use of Dover Chert as well as Ft. Payne, and Burlington Chert. A large ovate scraping tool appears in the far right corner of the mount. The bottom row includes six biface fragments of Burlington Chert, Novaculite, and Ft. Payne Chert.
18.Riker Mount, Artifacts: The assemblage includes bifaces and notched, stemmed, and tapered projectile points fashioned from Ft. Payne Chert. The specimens originate from the Cumberland River region of Western Tennessee. Peppered through the left and lower left portions of the mount are specimens of Burlington Chert. The assemblage displays much of the color variation within the Mississippian Age Ft. Payne Chert.
19.Riker Mount, Artifacts: The assemblage includes large rectangular and ovate bifacially flaked pieces originating in southern Indiana. The specimens are fashioned from highly fossiliferous Crescent, Wyandotte, Indiana Hornstone and Mill Creek Cherts. The middle of the frame illustrates greater numbers of white Burlington chert artifacts. The objects are derived from both Late Archaic as well as Early Woodland Periods.
20.Riker Mount, Artifacts: The assemblage includes primarily large bifaces fashioned of white Burlington Chert. Depicted in the center of the frame is a tapered lance blade fashioned from iron-rich chert originating from within the iron-rich Salem Fm. The specimen in the lower right corner is fashioned from the Ft, Payne Chert. The age affiliations are largely that of Late Archaic and Late Woodland.
Note that all information regarding this lot has been provided by the consignor, the auction house is not responsible for errors or omissions in the listing, description or provenance of this lot, use for reference only.