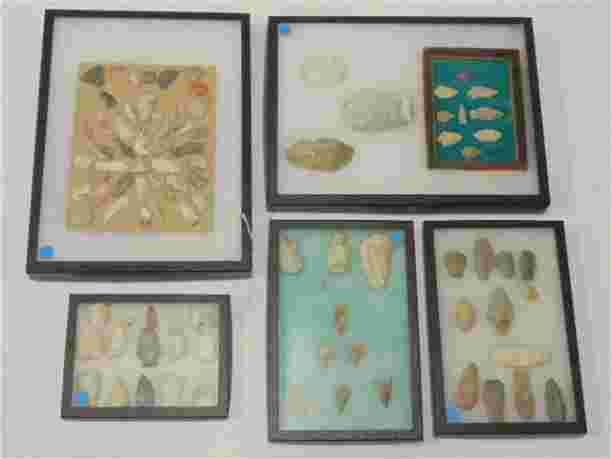 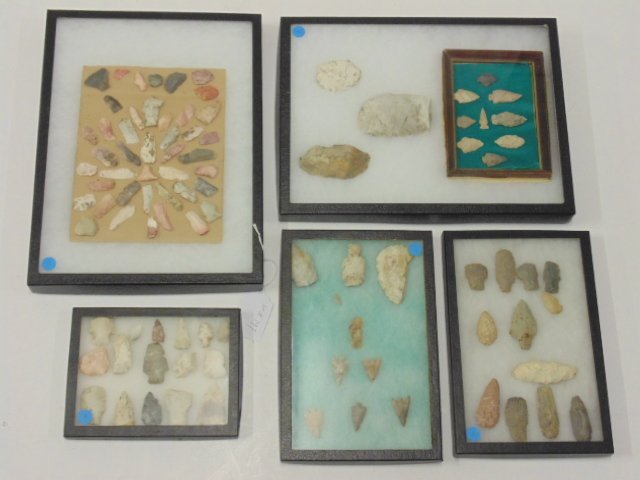 Collection of native indian arrow heads, from private collector, authority on the subject, this lot includes cases, riker mount 1 thru 5, case description:
1.Riker Mount, Artifacts: Upper portion, 7 eccentric flints from Mexico. The upper 5 are effigy thunderbird motifs. The lower piece is a serpent effigy piece. The last is a small chalcedony point. The chert appears to be from Colha. Collected during the turn of the century. Bottom portion, (to left) large ovate biface, broken. The right, two stemmed Late Archaic points. The bottom three artifacts are fashioned from Burlington Chert. Iowa.
2.Riker Mount, Artifacts: Top row of four objects are buffalo skinning scrapers, all fashioned from Wyandotte Chert, Indiana. Center portion and middle is a stemmed Middle Archaic (Neville Point) from New England. To left is small ovate biface of Burlington Chert. To the right small notched point of heat treated Burlington Chert. All found in southern Illinois. Bottom of middle, elongate biface of Burlington chert, southern Illinois. Bottom four, second from left is buffalo skinning scraper, Wyondotte Chert, Indiana. Far left, is stemmed point of heat treated Burlington Chert. The second from the right is tear shaped elongate biface of fossiliferous chert. The far right is a biface of Indiana Hornstone.
3.Riker Mount, Artifacts: A variety of notched and stemmed projectile points and bifaces from eastern Indiana. Large piece in center is of Boyle Chert, Specimen in the lower right is Carter Cave chert. The rest of the points are fashioned from non- and heat treated Burlington Chert.
4.Riker Mount, Artifacts: Arts and crafts Period frame with nine bifacially flaked pieces all from southern Illinois. The notched projectile point along the bottom of the frame is from the Late Archaic Period. Located in the center of the frame is a large Hopewell Period chert hoe blade. The bifacially flaked piece is heat treated and possesses strong sickle sheen or polish along its distal surface. The two objects on the bottom ends are to the left; a chert cache blade fashioned from Burlington Chert and a chert pick fashioned from heat treated Crescent Chert, from Illinois.
5.Riker Mount, Artifacts: Arts and Crafts frame from the turn of the century with an array of Hopewell bladelets employed for bloodletting rituals. The triangular object in the middle of the frame is the base of a t-shaped drill. All of the specimens are from southern Ohio, and the raw material is predominantly Burlington chert and Carter Cave chert.
Note that all information regarding this lot has been provided by the consignor, the auction house is not responsible for errors or omissions in the listing, description or provenance of this lot, use for reference only.